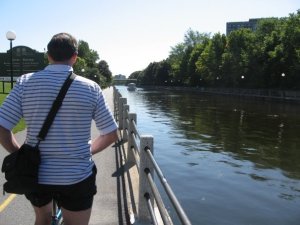 Steve along The Rideau Canal

I spent this past weekend in Ottawa visiting with my brother Steven and his family. It was a great time and reminded me once again why I love cycling so much.

Bicycle paths and bike lanes criss-cross the entire Ottawa-Carleton region. It is one of the best places to go cycling in all of Ontario. For me the best trails are the ones along the Ottawa River, partly paved, partly gravel, fully treed, the river on one side, urban forest on the other, dotted with history for much of the journey it is simply a great ride.

We took our bikes downtown on the bus (I like their racks a little better than the ones Guelph has just added) and then rode from the university along the canal, looped around Parliament Hill, and then followed the river back to Steve’s place in Orleans. Along we way we watched boats of all kinds sail up and down the Ottawa River, watched biplanes takeoff and land at the Aviation Museum, checked out the horses that perform in the Musical Ride at the RCMP stables, and enjoyed ice cream and frozen yogurt at Rockcliffe Park.

I was using my nephew Bryan’s mountain bike so it was a little small, and a little slow at times, but it didn’t take long for the joy of the ride to settle in and fade the size of the bike into the background. I can’t really nail it down to one specific thing but there is just something about riding a bike that speaks to the kid in me. After a few clicks the creaks and groans of middle-age fade and the teenager re-emerges. The sun, the wind, the freedom – the only words I’ve found for it are in the title of this post – ” I feel 15 instead of 55.”

And with the summer we’ve had I really needed a dose of 15-yer old exuberance. It took till Labour Day Weekend but Saturday felt so much like summer.  No rain, warm breezes, bright sunshine… I wanted it to go on forever. We rode for over 30 km and only had to deal with car traffic about 10% of the way. The rest of the ride was trails designed and installed specifically for cyclists, skateboarders, inline skaters and pedestrians.  It was a great day that I will remember for a very long time.

But it doesn’t have to be a once a year thing. My brother enjoys this commute 2 ot 3 times a week. He has this privilege because the infrastructure in Ottawa has been fashioned with all the road users in mind.  Other cities could easily do this if they had a mind to.  Some, including Guelph, claim they do. They look to Europe and Copenhagen to find the example they need for infrastructure and cycling culture. But they don’t need to look that far away, it exists right in their own back yard.

Is Ottawa a cycling paradise? Hardly! It suffers from all the same conflicts between drivers and cyclists that exist elsewhere.  In many places the two factions continue to get in each other’s way as driver fail to look for bicycles and cyclists behave like the rules of the road don’t apply to them. But Ottawa has gone a long way to keeping the warring factions apart.  Seperated bike lanes and trails make far more sense than adding bike lanes to the busiest streets in our cities. That is just asking for trouble.

But most of all the Ottawa example dispels the myth propagated in Southern Ontario that Canadian climate makes cycling an impractical solution for environment, infrastructure and a healthier population. No one can claim that Ottawa has mild winters or a short season. It simply takes commitment and patience.

It will take time to make the shift from a car centred culture to one of shared roads and services, but when it does happen then maybe instead of road rage a fewmore of us will spend the commute recapturing a little of our childhood.