Well, it’s started; the radiation regimen that is.

Today I went down for the first in a series of 35 radiation treatments and, as advertised, it was a very simple and, at this point anyway, painless process.  Well, not entirely painless. The bed they have you lie down on is pretty hard but that’s because a softer surface would allow too much movement and when they are trying to aim a beam of radiation (high energy x-rays I believe) as accurately as possible-movement results in more serious consequences than just a blurry picture.

The drive down was actually rather nice and not just because of the sunny weather.  The Canadian Cancer Society volunteer, Dave (not his real name) is a retired gentleman who has been doing this sort of thing for 8 years. Three times a week (occasionally four if he feels up to it) he drives people with one cancer or another to a variety of medical appointments in Southern Ontario. So far the furthest he has gone is London in one direction and Mississauga in the other.  He refuses to go to Toronto; the traffic there is more than he can handle.  He got started when he mentioned to a friend that he found retirement extremely boring and needed something to do. His friend was already a volunteer and suggested Dave join him.  As I mentioned, that was eight years ago. The friend can no longer drive, but Dave is still going strong.

The depth of Dave’s experience showed best when we hit downtown Hamilton.  Rather than taking the expressway up, for lack of a better term, the back side of the mountain, Dave sped along one back street after another, winding his way through a maze of tree-lined, one way streets miraculously avoiding heavy traffic and arrived at the Juravinski Cancer Centre in a mere 40 minutes.  This was the best time in which I have ever made the trip and it does go to show that if you do something often enough you get very good at it.

At the Centre things went very smoothly.  After a brief wait a charming woman named Kristy led me to a small comfortable room and made sure, first of all, that I was actually Dennis Gray.  When I was there for my orientation they took my picture; she had a copy of it with her and took the time to compare it to me.  Since five days growth of beard hadn’t changed me enough to make me unrecognizable she moved on to the next step.

She  made sure I fully understood what was about to happen, what the side effects of the treatments would be, the recommended ways to deal with them, and what I was going to do with each return trip.  All questions were answered in a pleasant, unhurried manner and repeated in the same manner when needed. It was a very comfortable experience. (See last few Paragraphs of previous post.)

Then after she showed me around a little I changed into a traditional hospital gown (only needed to strip from the waist up which was nice). Then there followed but a brief wait until it was time for me to go in to Machine 10B for my treatment. I had arrived a little early, thanks to Dave so I had time to get in a little reading. Love my Sony eReader.

When the time came Kristy escorted me to Machine 10b and introduced me to the other two treatment technologists. Since I didn’t see much of them (my glasses were off by this point) I can’t seem to remember their names; at least that’s my theory and I’m sticking to it.  But they were all very nice and made me as comfortable as they could on the aforementioned hard bed designed more to keep me immobile than comfortable.  Two quick low-energy x-rays to make sure I was lined up right and then it began.

From the patient’s point of view nothing could be simpler, or more uneventful.  For the next 20 minutes I laid flat on my back, staring straight up at the lights on the ceiling while servo-motors rotated the linear accelerator around me and made slight positional adjustments to the bed I was lying on until I was properly positioned for each of the 9 individual firings. Each firing lasts 20 seconds and is noticeable only by means of a very low volume buzz coming from the direction of the large circular head of the machine.

When the procedure was over (painless this time as I mentioned) I changed back into my shirt and jacket and rejoined Dave in the main lobby. After a quick stop at Tim’s for a double-double we were on our way back to Guelph.

I thanked Dave for his efforts on my behalf when I got home around 5:30, but somehow it hardly seemed adequate. I’ve been thinking about him and his ilk, volunteering the way they do. He picked me up at work, drove me down, waited for me for over an hour, drove me back to the work shop-because in my slight anxiety I forgot my keys, and then drove me home. In all about a three hour slice out of his day.  And this he has done 3 three times a week for the last eight years. They say Guelph is the volunteer capital of Canada. People like Dave are the reason why.  Thanks again Dave.

Speaking of driving; a number of you out there have expressed a willingness, dare I say even a desire, to drive me down for one of my appointments. Well, though it looks like the Cancer Society may have things well in hand, I too would greatly enjoy a chance to spend some time driving with you and getting to know you a little better in the process.  With that end in mind the link below will take you to an online version of my schedule of appointments.

Follow the link and let me know which one (1) appointment for which you positively know you are available to drive me down and drive me home. Keep in mind that each Wednesday they will be giving me an update of my schedule and when they do it’s possible some changes may take place. With new patients coming in all the time occasionally some juggling must take place, so please check back once a week or so. 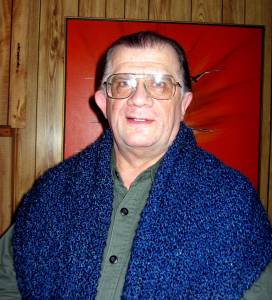 Well, that’s it for this time around. Oh! Except to say thanks once again to my good friend and theatre pal Beth Freeth, her mother, and the folks at Trinity United Church in Guelph, who knitted and prayed over the lovely prayer shawl in the picture at left.  They do this for people who are brought to their attention. They knit the shawls and then pray over them so that the folks who receive them will have a continuing reminder of the warmth of God’s love and the prayers that are going up on their behalf. It’s a marvelous gesture and I will treasure it always.

Gratitude as well to all of you who are praying for me and offering help in other tangible ways. (Great pot roast Margaret!)  I love you all and think of you often.