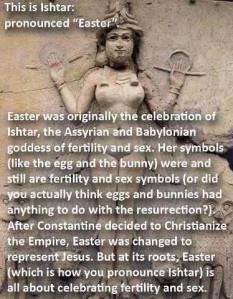 The picture at right is one that many of you have seen this Easter, it’s making the rounds thanks to Richard Dawkins and his Foundation and there’s two things that bother me about it.

First of all – it’s wrong! There’s a lot of myth and misinformation in it. I’d go into the details myself but fellow blogger Anne Theriault over at The Belle Jar does a wonderful job of that HERE. So I won’t repeat it all, please go and read her excellent article.

But to address my other complaint, let’s assume for a moment that it’s all true; that long before Christianity came along there was a celebration of fertility and sex that included bunnies and eggs and then got reworked when Constantine had a religious experience and found God. My response to this semi-etymological revelation…

Seriously! What difference does it make? Constantine, when looking for a time to note the death of Jesus and celebrate his resurrection the Emperor of Rome chose to cancel the sex, drugs and rock’n’roll party and deal with a far more serious occasion. That doesn’t mean the Easter celebration is about sex!

Time passes. Things change. Peoples, governments, empires and even religions come and go. “Old things are passed away; behold, all things are made new”, Paul tells the Corinthians.

Just as the love of Christ makes changes in the life of an individual, so too changes happen in the life of a nation, or an empire. Rome moved on; it stopped worshiping the ad hoc collection of gods it had gleaned from Greece and every other nation it had conquered and by royal decree focused on the God of Abraham,  Issac and Jacob, the Father of Jesus Christ. A wholesale change took place in the religious culture of the time.

Did a few of the old customs hang on, helping to shape the rubrics of the new religion? Possibly; people are people after all. It’s hard to let go of the past. Incorporating a few of the old bells and whistles can make the transition easier for the man-in-the-street who doesn’t fully understand the reason for the changes being made. That doesn’t diminish the new significance; it simply makes it a point of contact for the common person.

It’s a lot like the building where my home church meets each Sunday and throughout the week. It started it’s tour of duty as University Village Public School, an open concept building were the neighbourhood kids came to learn, play and prepare for the future.

Today, it’s called Kortright Presbyterian Church and the happenings within the building aren’t all that different. Now people of all ages come to learn, play and prepare for the future; only on the spiritual level instead of the secular. We learn about who we are, where we came from and, by the grace of God, where we are going.

In like manner, if I may be so bold, it may well be the same with Easter. Is it all that bad if the Easter celebration was once a festival of sex and fertility? Think about it: if life is to continue, if there is to me another generation after this one, then sex and fertility have to be part of the equation somewhere along the line. Human love, expressed in sex between an man and a woman, results in new life. The death and resurrection, an expression of God’s love at Easter, also results in new life; new spiritual life, and the haters in the world are never going to diminish the meaning of that.