It’s been a while since I have written a history post and with Canada Day upon us I figured it was a good time to do so; especially since today is an anniversary with a solid connection to my home town.

On this date, July 29th, in 1786 over 500 highlanders left the shores of Scotland for Upper Canada to establish a new settlement in Glengarry County. They were the remains of the Glengarry Fencibles, the last Catholic regiment in Britain at the time. When the regiment was disbanded after the Treaty of Amiens had been signed, their chaplain appealed to the government for a tract of land in Canada where they could settle. That chaplain was one Alexander Macdonell, who accompanied the group to their new home. The following year Macdonell would be ordained and made priest of the parish. It seemed for all the world that his military career was over;  but such was not exactly the case.

In December of 1811, when it became clear that war with the United States was pretty much a done deal, Sir George Prevost wrote to Lord Liverpool, the Colonial Secretary:

“I have sent Capt. Macdonell, of the King’s Regiment, into the townships where the Glengarry emigrants are settled in Upper Canada, to ascertain their ability to form a regiment of light infantry. Capt. Macdonell is selected for his zeal, ability and intelligence, with a name and national character acceptable to them, and the same religious persuasion, as they are all Roman Catholics.”1

That captain was not our friend Alexander, but rather bright young fellow named George. However, while George was in Glengarry County he collaborated with Father Macdonell, who proved to be a valuable ally in the formation of the regiment, once again referred to as the Glengarry Fencibles. In return for his efforts Macdonell was once again named the regimental chaplain with the understanding that he would never have to accompany them into battle.

After the war, in 1815, Alexander began his service as a Roman Catholic Bishop at St. Raphael’s Parish. In 1819 he was appointed Vicar Apostolic of Upper Canada, a position that was elevated to a bishopric in 1826, making Alexander Macdonell the first Bishop of Upper Canada.

It was during this time that the Bishop became involved in supporting the work of his friend John Galt, a novelist working for the Canada Company, in establishing new settlements throughout what is now southern Ontario. To express his gratitude for the Bishop’s assistance Galt chose a prime hilltop in the centre of the new settlement of Guelph which he “reserved for the Catholics, in compliment to my friend, Bishop Macdonell, for his advice in the formation of the Company.” It was Galt’s hope that his friend would move the seat of the bishopric to Guelph. The road leading up to the hill was named Macdonell Street and in the autumn of 1827 Bishop Macdonell was one of the first visitors to the “Royal City” (okay, at this point it was more like ‘Royal Village’). The monumental, gothic-style Church of Our Lady Immaculate would subsequently be erected on the hill where it still stands today; undeniably the most prominent landmark in the city.

To pay further tribute to the Bishop, in 1962, Notre Dame Catholic High School and the Loretto Academy for Girls, located on that same hill, were collectively renamed Bishop Macdonell Catholic High School (locally referred to as simply Bishop Mac). The two buildings were joined into one in 1967, and the school was moved to its new location in the south end of the city in 2004. The original building has been demolished. 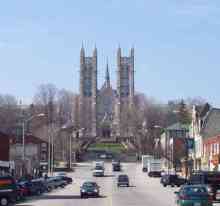 So, there you have it. If you moved to Guelph recently and have wondered who Bishop Macdonell was and why he had a school and a street named after him, now you know.

Why so many people constantly mispronounce Macdonell Street as ‘MacDonald’ however, remains a mystery.

Till next time… Shalom.